So, as I announced on Twitter yesterday, I’m shortly going to be leaving games journalism to work on new projects. That’s meant a delay to the next season of Unlimited Hyperbole, but it will continue in due time. I’ll also be blogging here still, but as of February I won’t be taking on any new commissions.

Until then though I’m finishing up my current assignments for Eurogamer, Custom PC Magazine and Bit-tech.net. One of those involved trawling back through some old notebooks in search of a quote I knew I’d written down months ago. This is why you should never throw away your notebooks.

I do have a big, grumpy and typically ill-advised blogpost drafted that explains why I’m leaving games journalism…but now isn’t the time for that. Instead, since I was re-reading all my old notes from events and such, I thought I’d throw up a few pages that are interesting (to me) for no reason in particular. Check them out below.

Above are my notes on Far Cry 3, as I first saw it at GamesCom in either 2011 or 2012. The demo we saw was hands-off; a presentation given by a producer in a small sit-down booth and which focused on Jason Brody storming one of Vaas’ camps and fleeing in a helicopter. Most of my notes mention a feature which was eventually cut from the game, which had XP exclamations pop up every time you scored a kill. The screen was constantly covered in +10 XP and +20 XP  notices, which detracted from what seemed like a really fun game. Good thing they cut it. 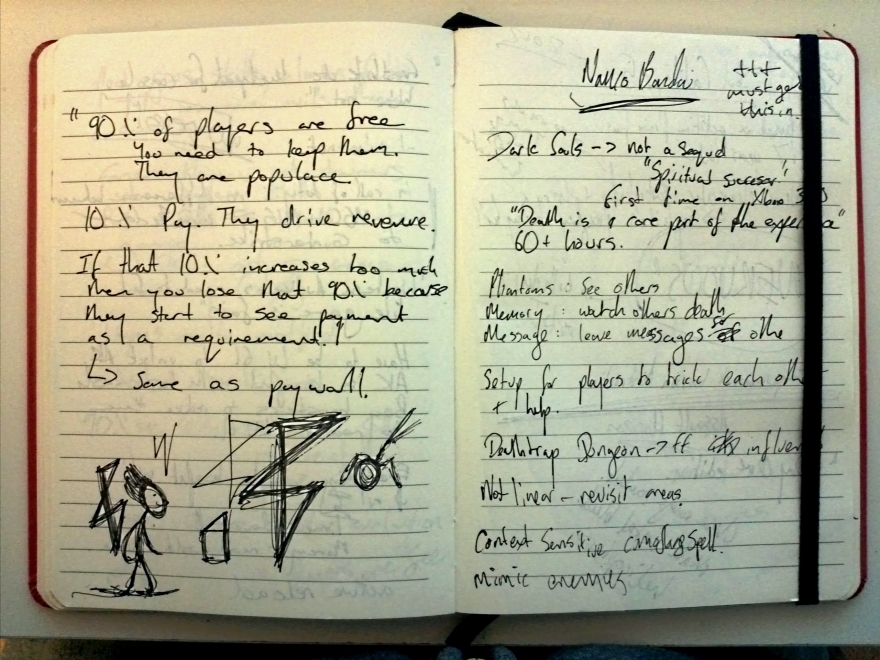 The left page is a quote from a presentation for a game called Hedone. The game itself was a transparently rubbish free-to-play shooter, but the presentation was interesting because it seemed like it was basically the same pitch given to publishers. It went over the marketing plan, competitive analysis and so on – things that journalists don’t normally see. This quote really stood out to me too as an honest and revealing glimpse of the maths behind F2P balancing; that the 90 per cent of players who never pay are the important players because they are the mob the 10 per cent pay to fight. If those percentages change from that balance too much, apparently the game will fail. 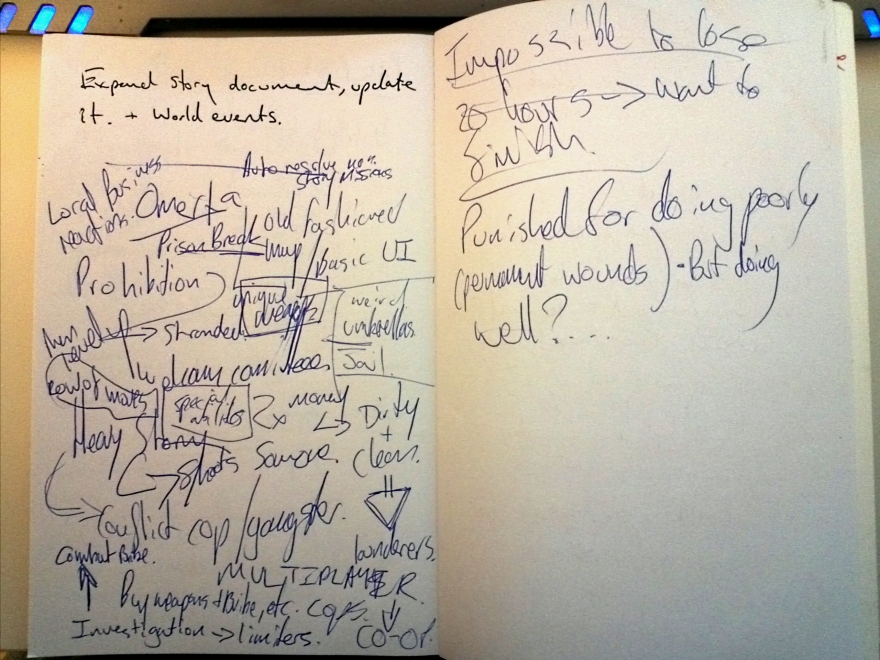 Game PRs and event organisers please pay attention: If you give your presentations in pitch-black rooms then journalists won’t be able to take proper notes. These scrawlings, taken at a preview of Omerta: City of Gangsters, are incomprehensible even to me. The black note at the top is a reminder for some narrative design work I was doing on a (still) unannounced mobile game.

Above is the start of Unlimited Hyperbole, kind of. Originally I toyed with a different format using three regular hosts (Clive Webster, Paul Goodhead and Me) and a new theme each week. They were happy to work on it, so we did a trial run called ‘Design Document’, but I wanted more than what was basically just three guys chatting. I cut it down into a shorter edit that had backing music and sounded like a structured interview and called that ‘Pretentious Podcast Prototype’. I showed it to the others, who liked it, but ultimately they didn’t want to do so much production work. I took the idea off on my own for a bit and later started working with Harriet. 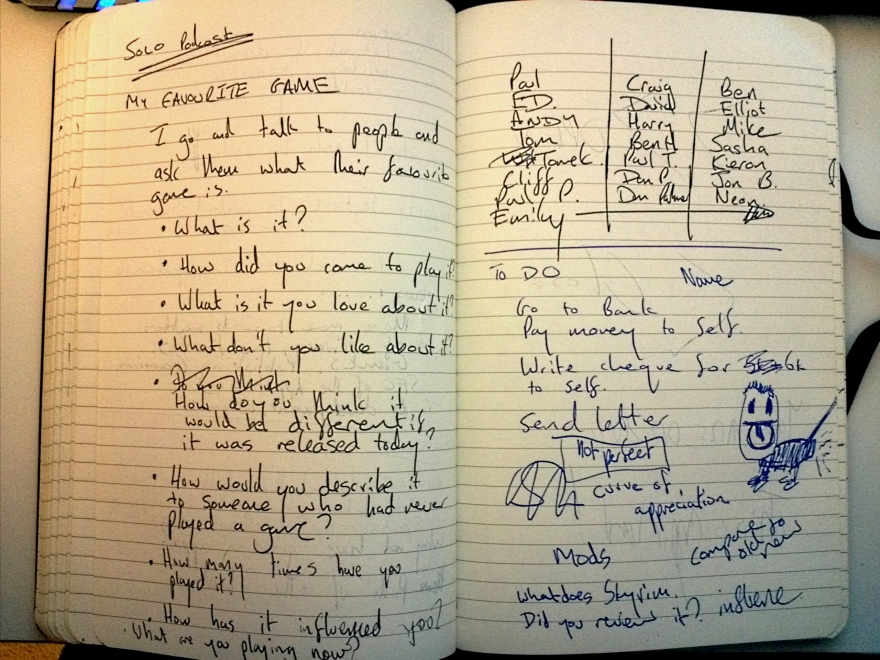 This was the next stage of UH’s evolution, written back when it was just ‘Solo Podcast’. The theme was set and some basic questions laid out, but it was still coming in to focus. On the right are people I thought would be interesting enough to warrant talking to. Some, such as Craig Lager, Kieron Gillen and Dan Pinchbeck, made it on to the show. Others, such as Emily Gera and Paul Presley, have yet to appear. I have no idea why there is a picture of a farting dog with a human face underneath, nor what ‘Not perfect curve of appreciation’ means.

When I was still Games Editor of Custom PC and Bit-tech I kept a lot of random notes like this which only made sense to me. This was just after Tim and Bindi left the editorial team, so I had to rescind their forum status. I also apparently needed to produce a list of games companies for our constantly inept ad salesman at that time and was toying with a feature idea called ‘The Man Who Fucked Up Sandy Bridge’ – three guesses why the editor didn’t go for that one. 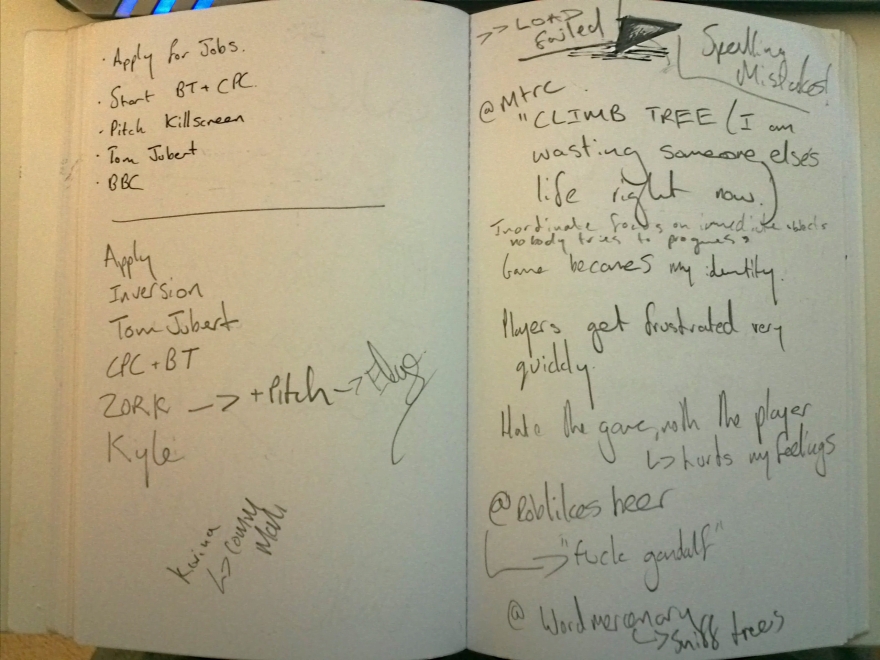 This was a feature I was planning on pitching to Edge Magazine. The idea was use Twitter to host a massively playable version of Zork. I’d type in a description, someone would tweet back an instruction and I’d input that to the game, feeding the result back through Twitter. It was popular for a bit, but players never got really got anywhere because they fought against each other and dedicated themselves to doing stupid things instead…as you can see on the right hand page. I wanted to call the feature ‘I Am Become Zork’, but in the end I got bored of the idea and started looking at art games instead. That led to me pitching an article to Kill Screen, but that never went anywhere because (as I found out) it takes them literally six frickin’ months to reply to an email. 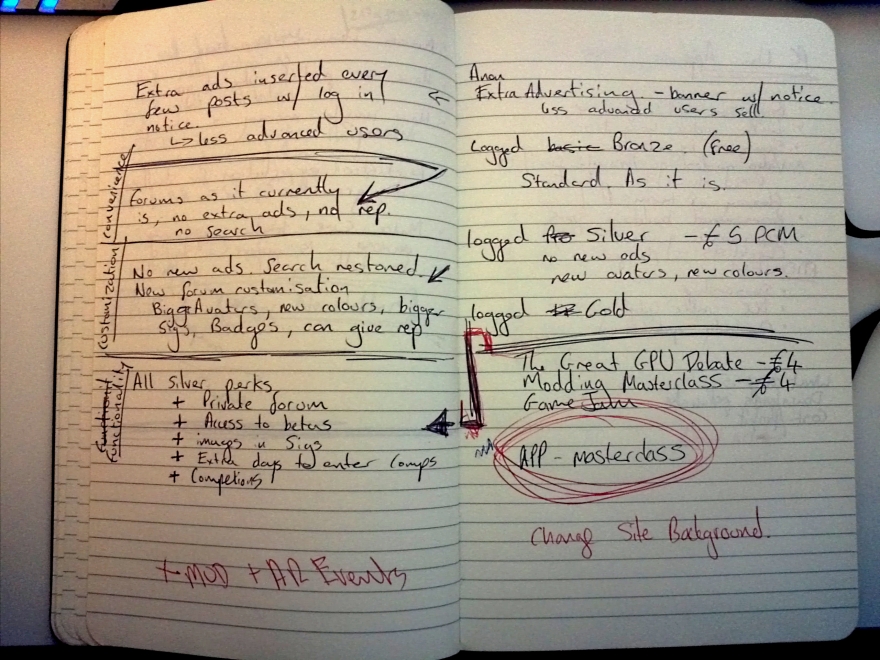 Before I left Custom PC and Bit-tech I had a few meetings with my counterpart, the Deputy Editor, about ways we could address a few community problems that were bothering us. This included putting a graduated paywall around the forums where users would pay a small fee of £2 to £4 to unlock extra content, remove inserted ads and get extra functionality. This never went anywhere thankfully, but only because the bureaucracy involved and general resistance to change meant we never took it outside of our private conversations. We did take forward the idea of a few community events however and, while we left before our ideas got off the ground, Bit-tech did later host a successful Pub Quiz that we assisted with.

These are notes I took from a substantial interview I did with Jonathan Blow and Dan Pinchbeck and which was basically a big turning point for my journalism career. Not only was this the point at which I decided I wanted to finally start working on the podcast that would become Unlimited Hyperbole, but Jon and Dan also gave me a level of frankness and professionalism that I’d not had from many others in the industry. I think we talked for about two hours and we covered everything from the frustrations Jon felt after Braid’s release to the obligation creators have to communicate their vision as accurately as possible. Jon also articulated some deeper suspicions I had about games publishers too – the paragraphs with the lines next to them – about how big game publishers might not be the experienced professionals they appear to be. 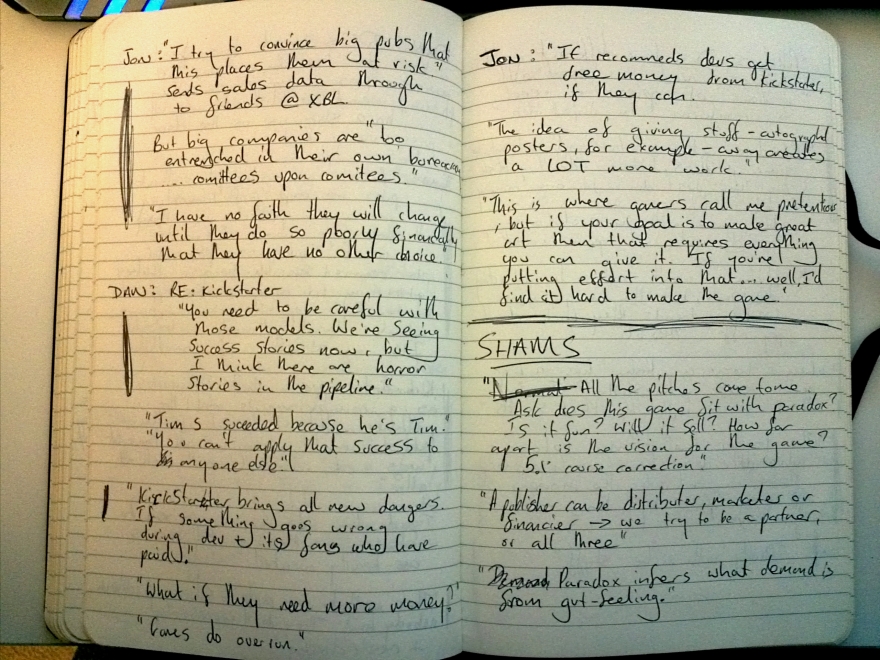 Continuing on from above, that interview was then followed up by one with the great Shams Jorjani of Paradox Interactive – who is also really frank and great to work with. Dan added some thoughts on Kickstarter in here, foreshadowing the disappointments we’ve started to see already. Both of these interviews went towards a piece I did for Continue Magazine on the ways games find financing. I found out recently that the piece was even nominated for The Games Journalism Prize, though it unfortunately didn’t qualify to the long list. Still, even awareness like that is great. I just like to know people read things.

That’s it for now.

4 thoughts on “Things Of Note…”

Tell me what you think... Cancel reply